A Moore Industries customer wanted to monitor levels in new storage tanks that are remotely located on their tank farm and are not connected to their existing MODBUS network. The details of the customer’s existing tank farm, recent additions and monitoring needs include:

Five new remote tanks were added and need to be monitored, but were built with a level sensing device that only provided a dry contact output from a float cage to indicate level, no MODBUS output available.

The customer needs to convert the dry-contact output from the new remote tank level devices to a MODBUS signal that indicates two level states: NEAR FULL or NOT FULL and then transmit the data via MODBUS for monitoring at the Distributed Control System (DCS).

The new remote tanks could not be connected to the existing MODBUS network using twisted pair wire because they are located across a river from the existing tanks and the DCS.

Moore Industries Applications Engineers provided the customer with a cost effective and simple solution for monitoring their new storage tanks that utilized their existing technologies. After reviewing their situation the following issues needed resolving:

The first step involved using a pair of resistors and a bulk DC power supply to convert the dry-contact relay output from each tank’s float cage to a 4-20mA signal.  Next a Moore Industries TMZ PC-Programmable MODBUS Transmitter (Signal Converter) was used to read and convert the 4-20mA signal into MODBUS.  And finally the new MODBUS signals had to be connected to the existing MODBUS network across the river.  This involved installing a pair of Moore Industries WNMs (Wireless Network Modules) that utilized a point-to-point wireless network link across the river.

Figure 1. below shows the Tank setup with dry-contact outputs in a float cage, resistors, TMZ transmitter, and the WNM wireless module necessary to add the five new tanks to the MODBUS network and DCS across the river. 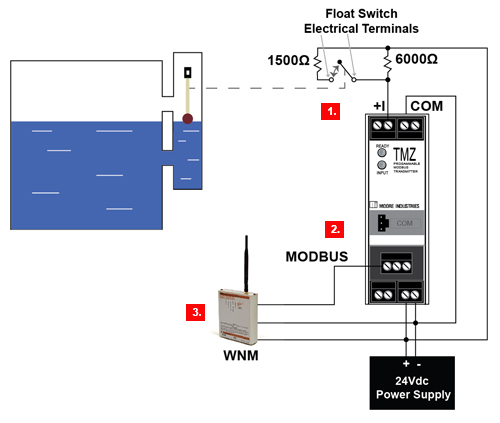 To solve the problem of getting level data from dry contacts into the existing MODBUS network, the Moore Industries application engineer suggested using a bulk 24dv power supply, a set of resistors and a TMZ MODBUS transmitter to be installed on each new storage tank. The TMZ (Model TMZ/HLPRG/MB/24DC [DIN]) is a very cost effective and flexible instrument. It accepts a direct signal input from a wide array of analog devices and converts the input to the standard MODBUS RTU (RS-485) communication protocol for direct interface with MODBUS-based monitoring and control systems.

The TMZ is powered in this application using a 24Vdc power supply at each new tank location. This same bulk power supply was then used in conjunction with resistors to convert the dry contacts to an analog signal (DC milliamps) that the TMZ could read.  The engineer connected the dry contacts’ two discrete terminals to the TMZ using a pair of resistors, 6000Ω and 1500Ω, to create a current loop signal representing the two different tank levels.

The TMZ translates the analog signal to a digital MODBUS communications signal.  Each TMZ was then connected to a RS-485 twisted pair network that was routed from tank to tank. Each storage tank TMZ has a unique MODBUS address assigned by the installer, which allows the DCS to distinguish individual tank level data.

The Moore Industries WNM Wireless Network Module used in this application is a bi-directional, point-to-point or point-to-multipoint, 900 Mhz frequency hopping spread spectrum radio modem that includes a RS-485 port.  In order to connect the two MODBUS networks together across the river, a set of WNMs was used in point-to-point configuration.  Each WNM can also be simultaneously conﬁgured as a tank site source and a wireless repeater, allowing for virtually unlimited transmission range. Since the customer already had a MODBUS RTU data communication network, the WNM’s RS-485 port made it an ideal choice for this application.

At the new storage tank, the engineer installed a Model WNM radio and connected it to the newly installed MODBUS RTU network. The MODBUS RTU communications signal received by the WMN over the twisted pair wires is transmitted by an antenna to the peer WNM radio that is now connected to the original MODBUS network and DCS across the river.  This essentially created an extension to the existing MODBUS RTU network through the radios.  This now allows bi-directional communication between the DCS and any tanks located across the river.

Get more detail on how the dry contacts were converted to an analog signal, and how the TMZ is configured to convert 4-20mA signals to MODBUS, see supplementary information.

If you have questions or need help on your own application, send us a message using E-Help.

If you would like product information, visit the catalog.