NORTH HILLS, Calif.—Sep. 12, 2019—Our industry lost a great man and pioneer on September 6th, 2019.  Leonard W. Moore (Len) who was founder and owner of Moore Industries-International, Inc. (www.miinet.com) passed at the age of 85. Len was born November 26th, 1933 in Hazelton, Iowa where he attended elementary through high school. At the age of 16 he graduated high school and then attended Iowa State University where he obtained a BS in Electrical Engineering.

After graduating college Len entered the Army in 1953 as a weapons guidance specialist and spent time at Fort Sill, OK and Fort Bliss, TX. He then served time in Japan training and teaching soldiers how to operate, calibrate and repair various guidance and artillery weapon systems. It was here where Len realized he had a passion for instruments and control circuits. After his tour in Japan, he left the Army and returned home to Iowa. 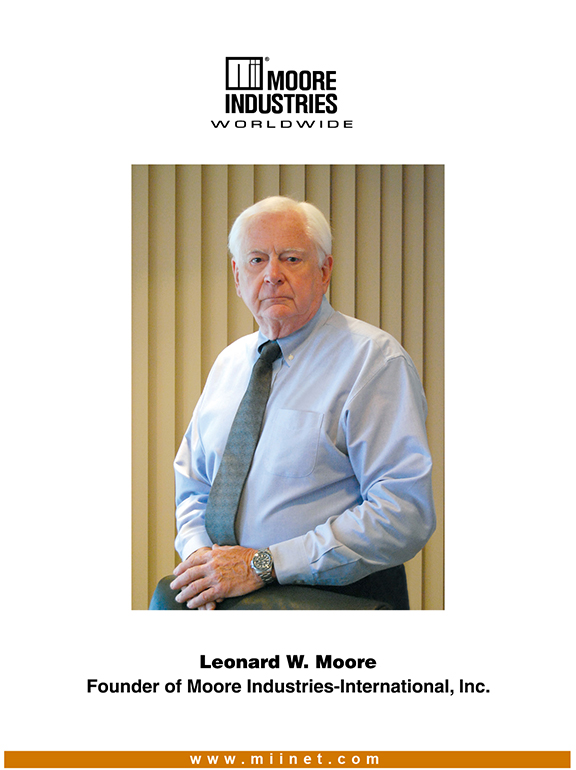 In 1958, newly married to wife Martha Moore and eager to start his career, he took a job with Hughes Aircraft in El Segundo, CA.  With one car and only a few suitcases to their name, Len and his wife packed up and headed west to start their new life. After a few years with Hughes and a few more engineering and automation jobs, Len made a bold decision to do things his own way – in 1968 he founded Moore Industries-International, Inc. in North Hills, CA.  Starting out in a small office with one employee and a very small budget, Len set out to design the most rugged industrial instrument solutions that he knew the industry needed.  He used to say that at Moore Industries “we are an engineering company that solves customer’s problems by manufacturing bulletproof solutions.”

Starting with one signal isolating/converting instrument, the SCT Signal Converter and Isolator, Len and his “troops” (the term that he used for the company’s employees) went on to design, build and support more than 225 different products that isolate, protect, convert, alarm, monitor, control and interface with any industrial or automation control and monitoring system. Len often said, “the best compliment we can get from our customers is that they forgot about our products or solutions because they performed so well that they just plain forgot they were ever installed.” This rugged M1 Tank design mentality, which he mandated, can be seen in most of the company’s products that are enveloped in solid aluminum cases instead of fragile plastic or polycarbonate housings.

More than 50 years after its inception, Moore Industries’ world headquarters is still prospering and remains in North Hills, CA. The company continues to manufacture 100% of its products at this USA location, something Len insisted upon.  With two acquisitions, more than 19 industry associated patents, 200 employees and remote offices located in the United Kingdom, The Netherlands, Belgium, Australia and China, the company continues to engineer, design, manufacture and support existing and new products for worldwide process control and automation customers.

While Len had a passion for his company and its employees, he lived a full life outside of the company too.  Len was an accomplished race car driver spending time in racing schools, competing on the Trans Am Race Circuit, and even sponsoring an Indy Series car during the 1980’s.  Flying was also a hobby and interest of Len’s.  Although he had hundreds of hours under his belt flying right seat during work trips in the company’s Commander airplane, it wasn’t until 2005 that Len finally went ahead and formally got his pilot’s license.  During this time, he had another side project going on:  restoring, and later flying, a 1946 single engine Ercoupe in his hangar to museum-like condition with World War II Army Air Corps colors.  Len used to say, “this is the world’s most expensive Ercoupe”, which is no surprise because he was an absolute perfectionist. He later donated this plane to the Palm Springs Air Museum.

In 2009 Len was inducted into the ISA’s revered group of Honorary Members - individuals whose support of, and/or contributions to, the advancement of the arts and sciences of instrumentation, systems, and automation are deserving of special recognition.  Len was also a Professional Engineer, had a private contractor’s license and was, of course, a pioneer and cornerstone for our industry.

Len is survived by his three sons: Tony and his companion Sonnie, Nick, and Chris and his wife Deanna; his grandsons Nick, Matthew, Justin and Christopher; and his longtime companion Christine Hulfish.

To a smart, devoted and compassionate man with a quick wit and great sense of humor who left a long and impressive legacy - Godspeed Len, we will miss you greatly.

Based in North Hills, CA, Moore Industries is a world leader in the design and manufacture of rail, panel and field instruments for industrial process control and monitoring, system integration and factory automation. The company has direct sales offices in the United States and additional strategic worldwide locations in Australia, Belgium, the Netherlands, the People's Republic of China and the United Kingdom. The company serves a variety of industries such as chemical and petrochemical; power generation and transmission; petroleum extraction, refining and transport; pulp and paper; food and beverage; mining and metal refining; pharmaceuticals and biotechnology; industrial machinery and equipment; water and wastewater; and environmental and pollution monitoring. 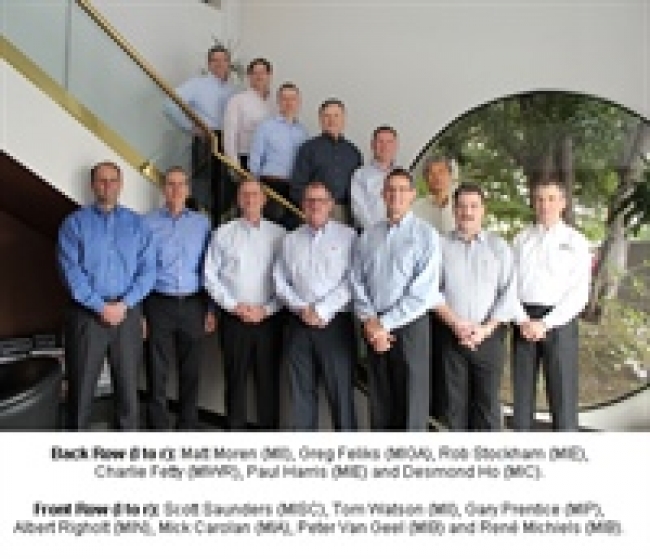 Moore Industries Revs Up for 2015 with International Sales Meeting 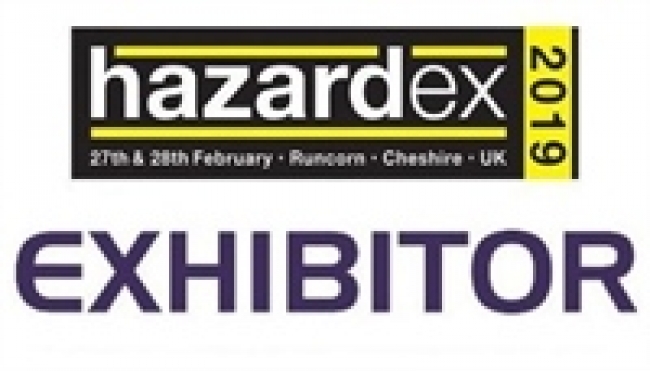 MIE to Participate in HazardEx Expo 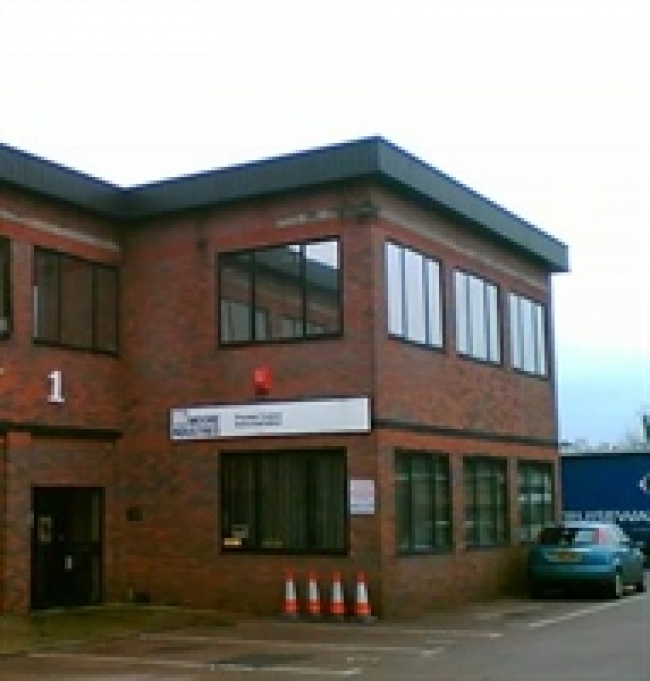 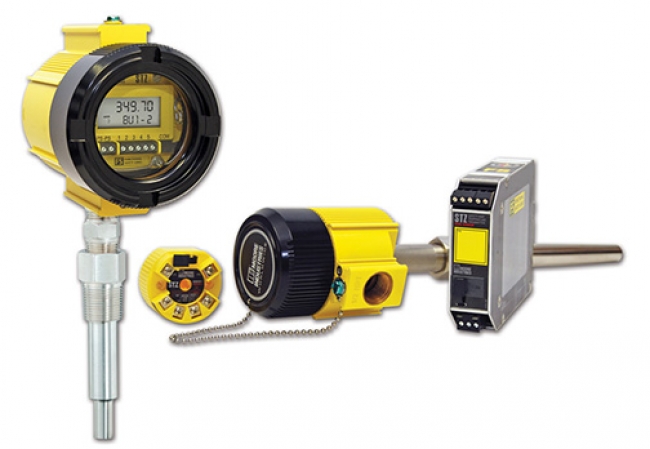 Hazardex Award Nomination - Get the Vote Out 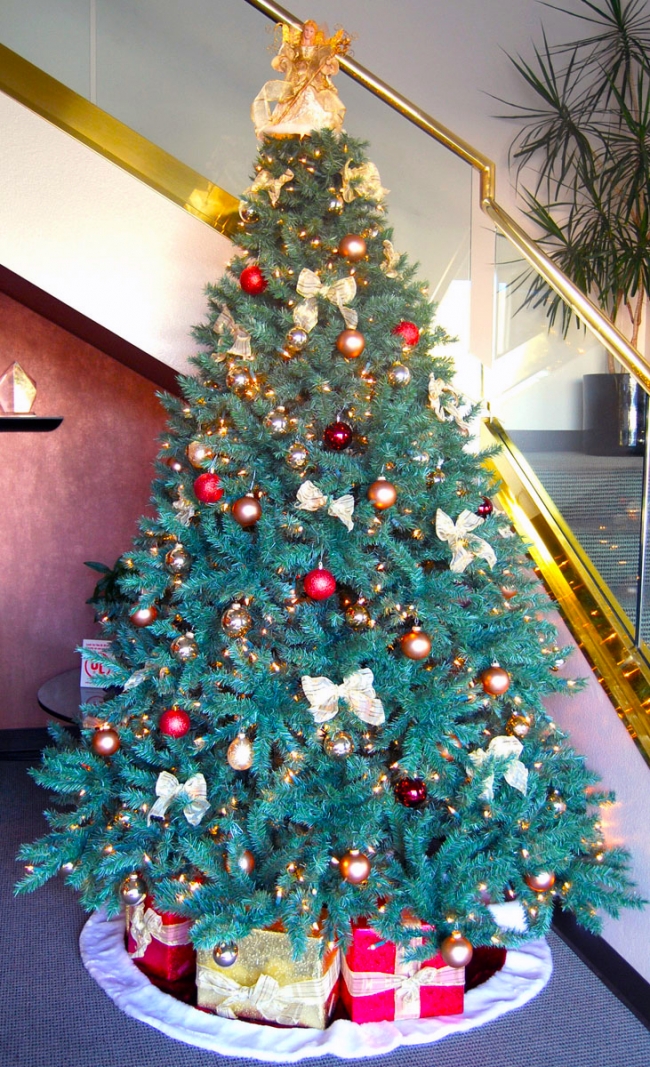